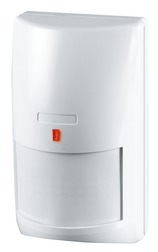 The Triplex MW motion detector is a motion sensor with two PIR sensors and one microwave element. An alarm is not triggered until all sensors detect movement. The combination of microwave (MW) and two passive infrared (PIR) sensors ensures almost 100-percent protection against false alarms. The reason: An alarm is not triggered until all sensors – which use two technically different detection methods – register movement. Whereas the PIR sensors react to moving heat, the microwave sensor actively monitors its surroundings for movement. The transmission frequency is 9.35 GHz. The best place to install the sensor is in a corner, between 2 and 3 metres above the floor. The intruder's possible direction of movement should be at right-angles to the sensor. The viewing angle of the Triplex MW motion detector sensor is 90°, and the detection range - depending on installation height - up to 15m x 15m. You can vary its sensitivity by means of a jumper. This way you can define the number of pulses that have to be detected before the sensor opens the alarm relay. The Triplex MW motion detector sensor has an alarm memory. If the alarm center is disarmed following an alarm, the LED on the sensor that triggered the alarm lights up. Depending on the configuration, you can also see which sensor first triggered the alarm.