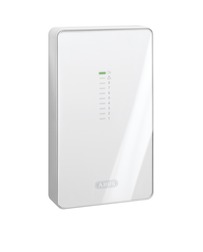 Repeater module (doubles the range):
The WAM forwards signals from up to 8 detectors to the alarm panel, essentially doubling the wireless transmission range.
Note: No repeating of the radio control unit FUBE50000, Rolling Code components and the wireless outdoor siren FUSG50100

Output module (e.g. home automation):
Up to 4 outputs (switching capacity 500 mA) in the WAM are activated for programmed events. Transmitter/receiver module: in addition to the 4 outputs, the alarm inputs on the WAM (1 x alarm, 1 x tampering) are utilised.

Sounder module:
The WAM can be used to connect an external sounder (sounder & flashing light) to the Secvest (meaning a wired sounder will also respond to wireless signals).

Sounder transmitter/receiver:
The WAM can be used to integrate a wireless sounder into a wired alarm system.

The Secvest can be easily operated. It can be armed and disarmed by remote control, button, PIN code, chip key, the turn of a key, or using a mobile phone. The response in the form of a voice announcement, an optical or acoustic signal lets you know the status of the system. ...
Other interesting products from the category Control devices and extensions