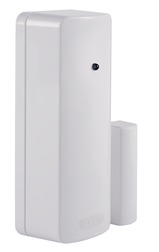 Reliable alarm triggering in the event of intrusion
The wireless opening detector detects and reports the unauthorised opening of doors and windows using a magnetic contact. In such cases, it informs the wireless alarm panel, which then triggers a corresponding alarm.

Even greater protection with additional wired alarm zones
The wireless opening detector also allows the wiring of additional detectors in order to effectively enhance intrusion protection. The detector can be connected to a passive glass breakage detector, for example, which can be mounted to the window pane and detects window breakages. The wireless opening detector for the Secvest wireless alarm system is available in white and brown.