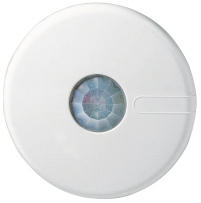 The Xevox 360° is a motion sensor with one PIR sensor. It reacts to heat movement and reports it to the alarm panel. Installed on the ceiling, this sensor monitors the whole room. With a detection range of 360°, these sensors have the complete room under control. The aperture angle of the lens is 110°. For example: If the Xevox 360° is installed at a height of 4 meters, it monitors a cone-shaped space with a diameter of 13 meters at ground level. At 1.2 meters above the ground, the diameter of the monitored area is 8 meters. It is particularly suitable for monitoring large, underground corridors. The optimum installation location of the Xevox 360° is the center of the ceiling. The intruder's possible direction of movement should be at right-angles to the sensor. Do not install the sensor near to sources of heat. By means of a jumper, you can change the sensitivity of the Xevox 360° motion sensor. This way you can define the number of pulses that have to be detected before the sensor opens the alarm relay.

The IR motion detectors of the ABUS Terxon alarm systems reliably react to body heat in the room. The pet-immune versions are suitable for pet owners. Professionally installed, they detect intruders, enabling fast intervention to protect your property. ...
Other interesting products from the category Motion detectors