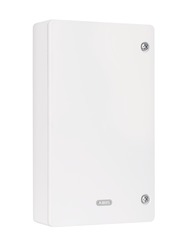 Secvest plus hybrid module: increased range and more applications
Up to two hybrid modules can be integrated in the Secvest via wireless connection, thus multiplying the possible applications and range of existing and new wireless alarm systems. This makes it possible to monitor other building sections or extensions, for example.

Wired alarm plus Secvest – advantage: New buildings
In connection with existing wired alarm components, the hybrid module forms a bridge to the wireless alarm technology. For example, pre-wired windows are already integrated in new buildings. Wireless detectors are also used in parts of buildings that are harder to reach with wires.

Alarm, video, entry controls and mechatronics
The hybrid module turns wireless into wired and wired into wireless. And alarm systems into combined security systems. By connecting to the ABUS wAppLoxx, the property benefits from intelligent access management while simultaneously eliminating false alarms. In addition to this, mechatronic detectors and ABUS IP cameras can be integrated via the wAppLoxx Control or the Secvest control panel. The system is controlled conveniently via app.

Plus home control
In combination with Secvest, the hybrid module can also be used to implement numerous smart home scenarios. Garage doors, household lighting or rolling shutters can be operated in this way, for example. It works automatically in the event of an alarm, so users get a greater overview and can respond more quickly. Alternatively, users can intervene manually at the control panel or at one of the control elements, for maximum convenience in a safe and smart home.