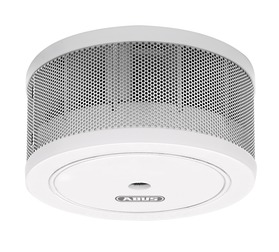 Rapid warning about deadly smoke<CRLF>More than 500 people die as a result of fires in Germany each year, and 95% of these deaths can be attributed to toxic smoke. As our sense of smell shuts down while we're asleep, most victims only wake up when it is too late, losing their orientation in the thick smoke, hindering their ability to reach safety in time. It only takes three inhalations of the toxic fumes to cause loss of consciousness, which is swiftly followed by death. The majority of fires are not caused by negligence: technical faults, such as cable fires, are among the most common causes, and can occur at any time without warning.<CRLF><CRLF>The ABUS photoelectric smoke detector detects even the smallest smoke particles and alerts anyone in the house by sounding a loud alarm – quickly, effectively and before the fire takes hold. The smoke detector has a detection range of up to 40 m² surrounding the area in which it is mounted. In order to ensure optimal protection, we recommend a separate detector for each hallway, staircase, living room and bedroom.<CRLF>False alarms (caused by disturbances such as dust and damp) can be silenced simply by pressing the large test button.<CRLF><CRLF>Important information on installation and battery life<CRLF>In apartments, all bedrooms, children's rooms and hallways leading to living rooms must each be fitted with at least one smoke detector. The smoke detector must be set up (or installed) and used in such a way that smoke can be swiftly detected and reported. A firmly inserted 3 V lithium battery ensures that the smoke detector will function reliably and for longer. Tests as to whether the detector is functioning properly should be conducted regularly by pressing the large test button. If the detector is not working properly or the battery is low, it will indicate this acoustically and visually.<CRLF><CRLF>Certification and Q-mark quality<CRLF>In addition to meeting the legal DIN EN 14604 standard, the smoke detector also meets the advanced quality criteria for Q-mark certification in accordance with vfdb (GFPA German Fire Protection Association) guideline 14-01. The independent Q-mark guarantees remarkable durability, increased security and easier use, thanks to the advanced test criteria for the fixed-installation battery with a service life of at least 10 years, the quality of manufacturing, the housing, which is designed to eliminate false alarms, and the resistance to environmental influences.<CRLF>